Luis Arce did not offer the "tri aid bonus" during his campaign, network claims are unsubstantiated – Bolivia Verifies Skip to navigation Skip to content 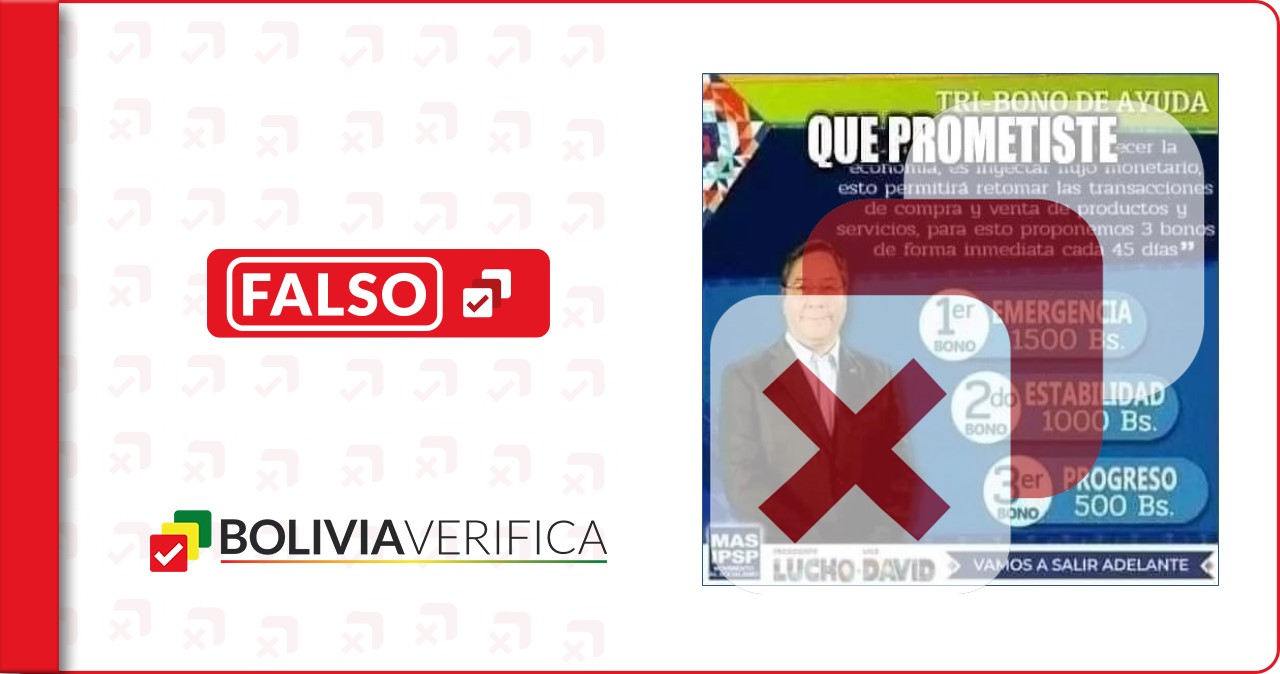 Various social media posts demand the president to fulfill the payments "promised" during the election campaign. However, none of those proposed were included in Arce's government plan nor was it publicly announced.

In different pages on social networks circulates since April a publication in which they demand that President Luis Arce comply with the "tri bonus of help" supposedly promised during the electoral campaign. This version is fake, Arce did not offer those bonds and they were not included in his government plan..

"Where is the bonus you promised?", questions a publication on Facebook page "Irupana", same that was shared on other social networks. The publication is accompanied by an image that is supposedly from the electoral campaign of Luis Arce with the Movement to Socialism (but).

They are not proposals made by Luis Arce

The so-called "Emergency" bonds, Stability and Progress" were not within the government program proposed by the Movement to Socialism (but) who postulated the binomial Luis Arce-David Choquehuanca. In fact, these proposals are part of a series of false publications that have already been Denied formerly by Bolivia Verifica.

The Minister of the Presidency, Maria Nela Prada, had assured Bolivia Verifica that the president "never" proposed the payment of these social benefits. In fact, were not included in the Government plan, as Bolivia Verifica found when reviewing the document. The only bonus proposed during the election campaign was the "Bonus Against Hunger", of Bs 1.000, whose delivery is in process, after the extension of the payment until the end of the month.

If you want to see other verifications made about the delivery of bonds in Bolivia you can see here, here o here.

Indian soldiers did not suffer heart attacks because of coronavirus vaccine

If they tell you that Samsung is giving away phones, is false. They just want to steal your information