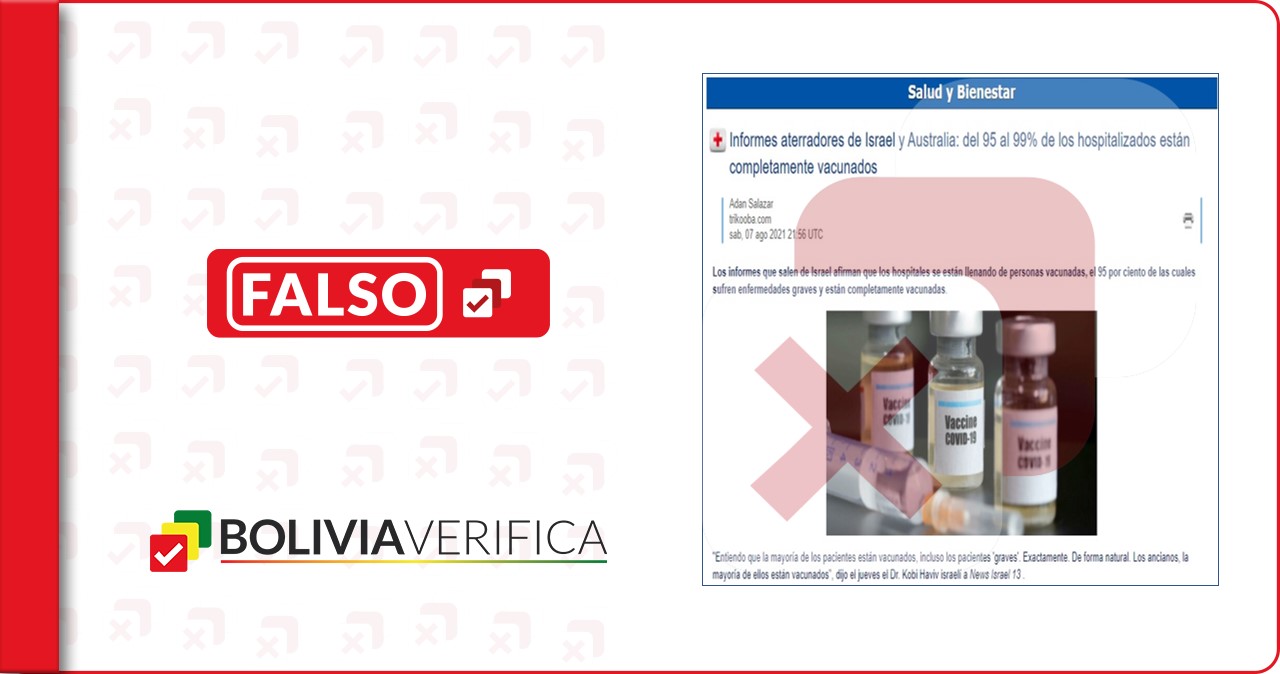 In social networks and different web pages circulate data where it is indicated that in Australia and Israel of the 95 to the 99% of hospitalized patients are “Vaccinated”. This version is false.

A user of Twitter published the 5 Of August the following: “The 95% of severe patients are vaccinated. The 85-90% of hospitalizations are in fully vaccinated people. We are opening more and more COVID rooms. Vaccine effectiveness is declining, Fading”.

The user attributes the data to Dr. Kobi Haviv who is director of the Herzoq hospital in Israel.

The content was replicated by different media and web pages such as Tradition Life, Trikooba, Radio Revolution and other less well-known.

An Israeli study published on 28 July 2021 by the magazine New England Journal of Medicine reveals that the incidence of COVID-19 infection of those fully vaccinated is “very low”.

between 11.453 fully vaccinated health workers, 1.497 (13,1%) underwent PCR tests during the study period. Workers tested, were detected 39 innovative cases. more than 38 people were tested for every positive case that was detected, for a positivity of the 2,6%. Therefore, this percentage was much lower than the test positivity rate in Israel at the time, since the relationship between the positive results and the large number of tests administered in our study was much lower than that of the national population", says part of the results obtained in the research.

The page United by Israel, based on information from the Ministry of Health of that country, published that up to the 17 of August 7.800 Israelis tested positive for COVID and even the 19 August recorded 961 Hospitalized, 578 in serious condition and 104 with fans.

The data suggest that even if there are infections among fully vaccinated Israelis, these are less severe than among those who have not received any injections.

A sample of the 16 August 2021 reflects the following data:

• 154,7 severely ill patients in Israel were not vaccinated.

About the interview submitted as evidence, where he mentions Dr. Kobi Haviv as director of the Herzoq hospital in Jerusalem, Israel, it is taken out of context and only shows a part of it.

the interview was made by local station Channel 13 about a new wave of disease in Israel.

Dr. Haviv said that the 90% of the patients seen at Herzog had already been vaccinated and that the effectiveness of the vaccine is decreasing. An interruption in the doctor's speech can be noted in the video posted on Twitter and shared by accounts in different countries.

While the Twitter post uses figures presented by the doctor in the interview, it does not take into account that the hospital unit where he works serves elderly people, the most vaccinated age group in that country, thus increasing the number of immunized persons served.

The publication also does not mention Kobi Haviv's sayings in other interviews, one of them on the same channel, where he advocates vaccination, highlights the importance of the vaccine in protecting people in more severe cases and even advises the application of the third dose.

The misinformation circulating about Australia is based on a video that was cut from a press conference of the 25 July by Jeremy McAnulty, responsible for health of the New Wales region.

The authority stated that 141 people were hospitalized with COVID-19 and 43 of them in intensive care. "All but one are vaccinated. A person had just received a dose of vaccine.".

This statement is used by anti-vaccine movements, although the video is cut. Minutes after those words, a journalist asked the authority to clarify the data referred to, to which he responded: "I think I was wrong before. Of the 43 people in intensive care, 42 have not been vaccinated. The remaining person has only one dose".

This content was also denied by our fellow fact-checkers of Newtral Y APP.

What will Santa Cruz do in the face of the coronavirus? 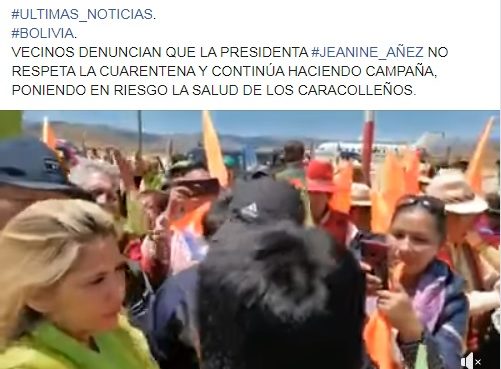