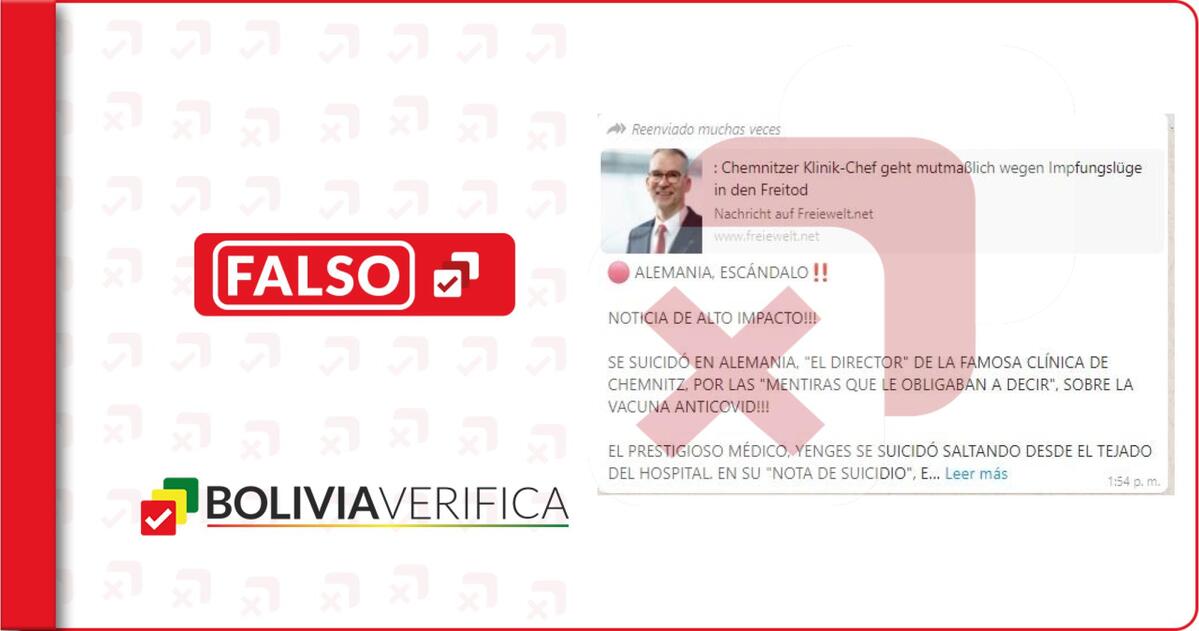 The 2 in November, the death of the director of the Chemnitz clinic was known, Thomas Jendges. Police investigate the case as a possible suicide

In WhatsApp groups circulates a message where it is assured that the director of the German clinic Chemnitz, Thomas Jendges, left a posthumous letter stating that "vaccines are not good and vaccination is a genocidal act". This information is false. No media or authority assured that there is an alleged letter from the doctor who died on 2 Of November.

“The prestigious doctor, Yenges committed suicide by jumping from the roof of the hospital. In its “suicide note”, the doctor would have justified his desperate action in the fact that “I could no longer tolerate the constant lies and deceptions about covid vaccines”, signals the message that runs through networks.

Bolivia Verifies Asked in this regard and found that the spokeswoman of the Chemnitz police, Jana Ulbricht, assured the Spanish verifier Newtral who are unaware that Jendges has left a posthumous note, before you die.

"No suicide note related to the incident is known", Said.

In the same way, the spokesman for the mayor's office of Chemnitz, Sven Schulze, declared to the German verifier DPA the 10 of November that he was unaware of the existence of an alleged letter left by Jendges, before you die. “No, we are not aware of any farewell letters.", Indicated.

A detail that makes you suspicious of the veracity of the message that circulates on WhatsApp is that it mentions that a part of the alleged note has been disseminated, but not complete. However, Bolivia Verifica inquired into Facebook, Twitter Y Google, but no image of the fragment of the alleged note to which they refer was found.

There is no evidence that the doctor has been uncomfortable with vaccination or has expressed a negative stance on it. On the contrary, there is evidence that he supported vaccination. The 31 of August, Jendges spoke out at the opening of a permanent vaccination center at the Chemnitz clinic, where he expressed his support and approval.

"With this vaccination offer we want to stop the coronavirus pandemic. Vaccination greatly reduces the risk of infection and severe illness from SARS-CoV-2.", said the doctor at the inauguration, according to a communiqué press release.

The theory that vaccines are unsafe and can cause harm to the immunized is a recurring one of the anti-vaxxers.. Research and these months of immunization have shown that dosages are safe and effective in preventing, mostly, severe cases or deaths from COVID-19.

Dr. Jendges' case investigated as possible suicide. He had 55 years and was a graduate engineer and phD economist. Jendges was in charge of management tasks in clinics for more than 20 years. during 11 years he was in the direction of SLK-Kliniken Heilbronn, a clinical group with about 6.000 employees that is comparable to the Chemnitz Clinic. Since the beginning of 2020 worked for Oberender AG as a hospital director and consultant. A few weeks before his death he assumed the direction of the Chemnitz Clinic.

Arce did not promise to pay the Familia and Universal bonds in his government, but he did suggest larger amounts in the Áñez administration