true: two videos where they distribute tickets to protesters of the wiphala reparation march in Santa Cruz – Bolivia Verifies Skip to navigation Skip to content

Items featured in viral videos match media records. Bolivia Verifica accessed a recording that shows that tokens were distributed to the protesters in the front of the Governor's Office.

By Sabrina Lanza and Paola Palacios

Through WhatsApp and Facebook circulate two viral videos referring to the group of demonstrators who went to the doors of the Government of Santa Cruz in an act of reparation to the wiphala in the past 28 September. In the audiovisuals, the marchers are seen receiving something from a person in the group.. Videos are shared with the claim that it's about money. In this note we tell you what we investigate.

In both videos you can see both a man (video 1) like a woman (video 2) delivering some object (apparently roles) to the people who went to march. "Viralize… See how the whipala marchers are paid….Viralize!!!", affirms the text that accompanies the viral messages But what is it that they give them? Are these videos real??

In the first video viralized in social networks, it is observed that a man surrounded by a tumult of people distributes something to them in the street of the front of the Governorate. You can also see how several come to see what is being delivered. The video we mentioned is as follows:

Bolivia Verifica accessed another video of the same scene but from another angle closer. The audiovisual was recorded by one of those present at the scene of the event. In the images you can clearly see that the protesters received “tickets”. You also hear them say, among the tumult, that these are tikets “for chicken”.

We found that this video is the same scene of the viral video because there are at least four elements that prove it. Below we detail them.

Screenshots of the video 1

In the first video, it can be observed that a man in a blue shirt distributes something and is surrounded by several people, of these we identify two one of a blouse of white polka dots and another of print. This is also distinguished by a second element that is a seller of red clothing, with madil, hat and a green cart. In an approach to the video we accessed, the same man in a blue shirt is seen handing out “Chips” green and the same people from the viral video. So you can also see that there is the seller of red clothing almost next to the one who distributes the “tickets”. This is seen in the following screenshot: 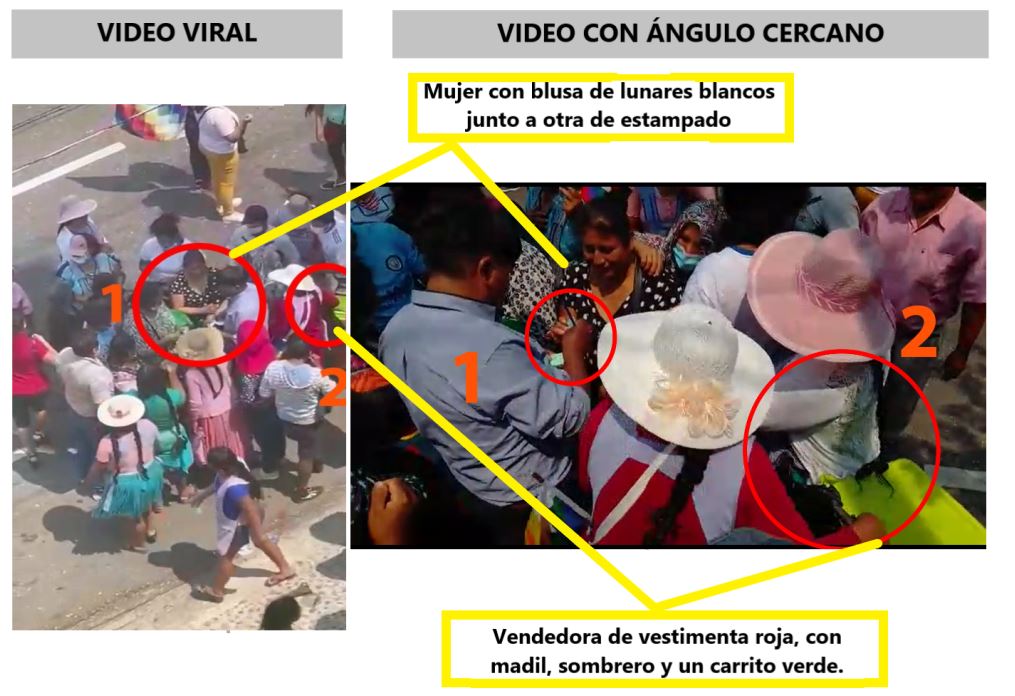 Continuing with the analysis of the video 1, we were able to identify two other elements that are also found in the audiovisual to which we accessed. It is the presence of a woman with a scarf that covers her head and a soft drink seller who wears a red vest and cap. In the following image extracted from the video that could be accessed, these two elements are identified., confirming that it is the same place and time. 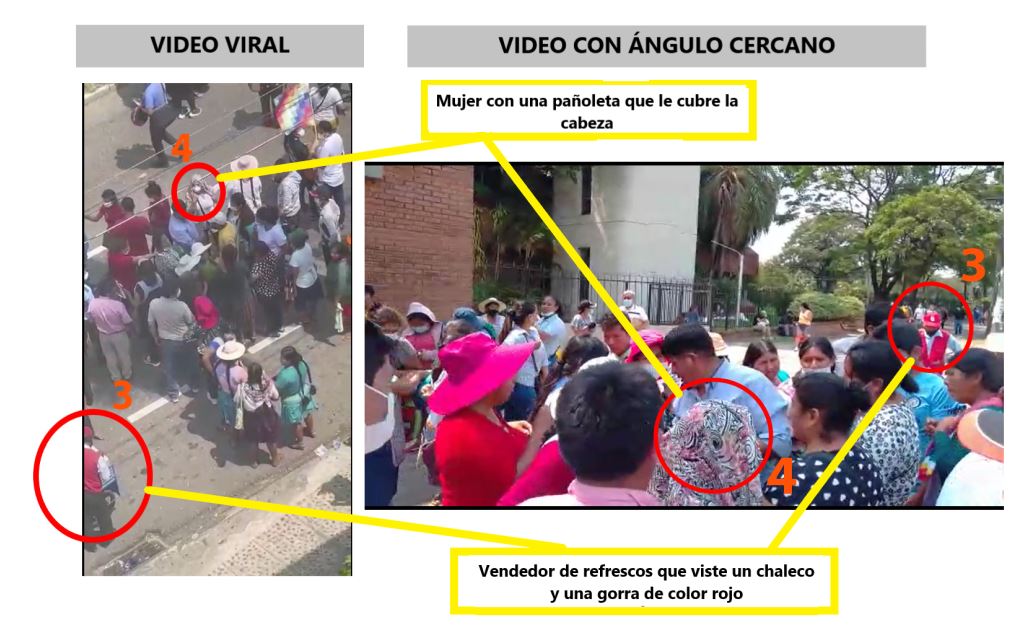 Another forceful element in the recording, is the logo of the Government behind the back of the group of people who sought to receive a token, thus the man who distributed the “tickets”, as you can see below: 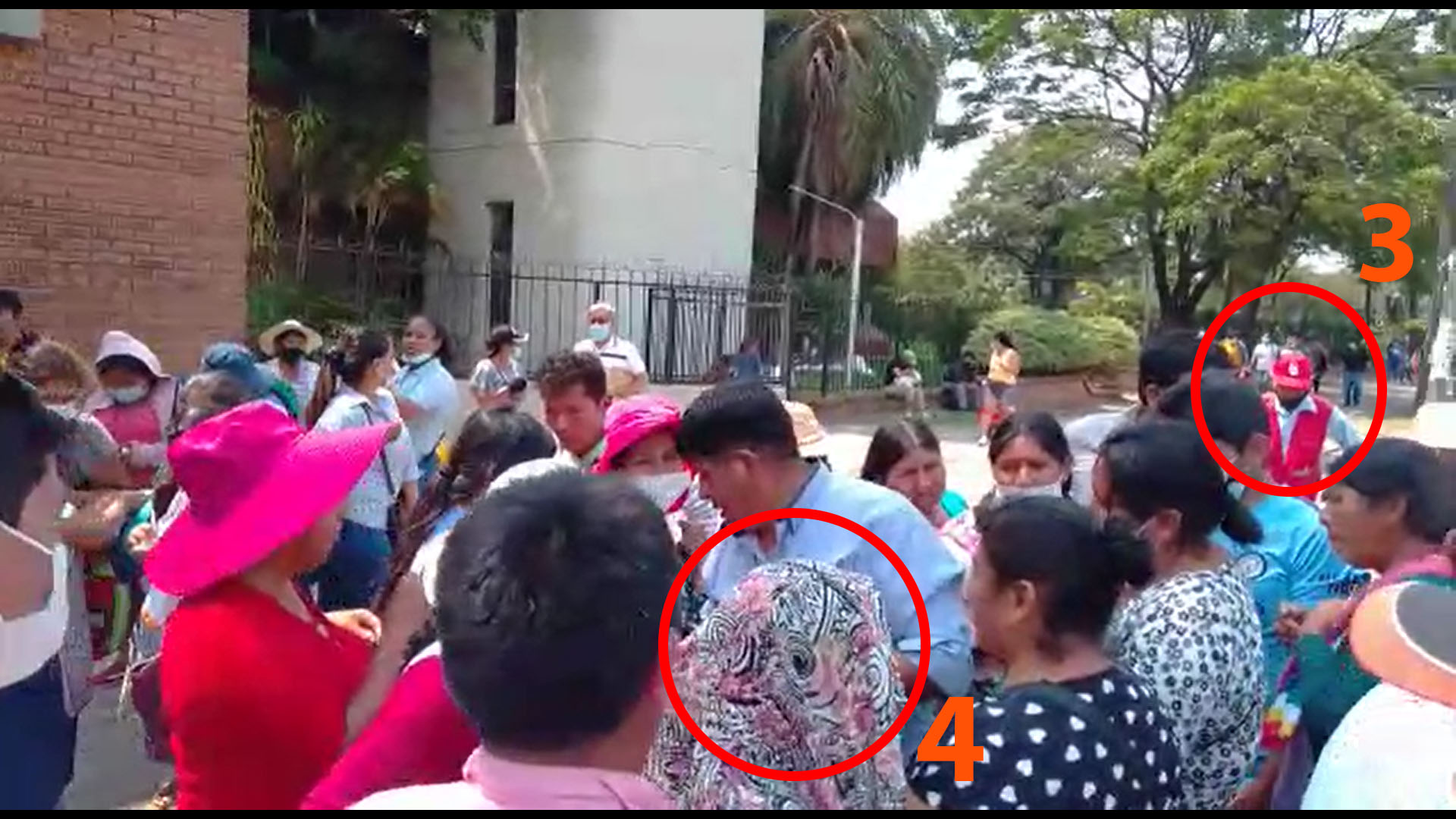 Screenshot of the first one accessed by Bolivia Verifica 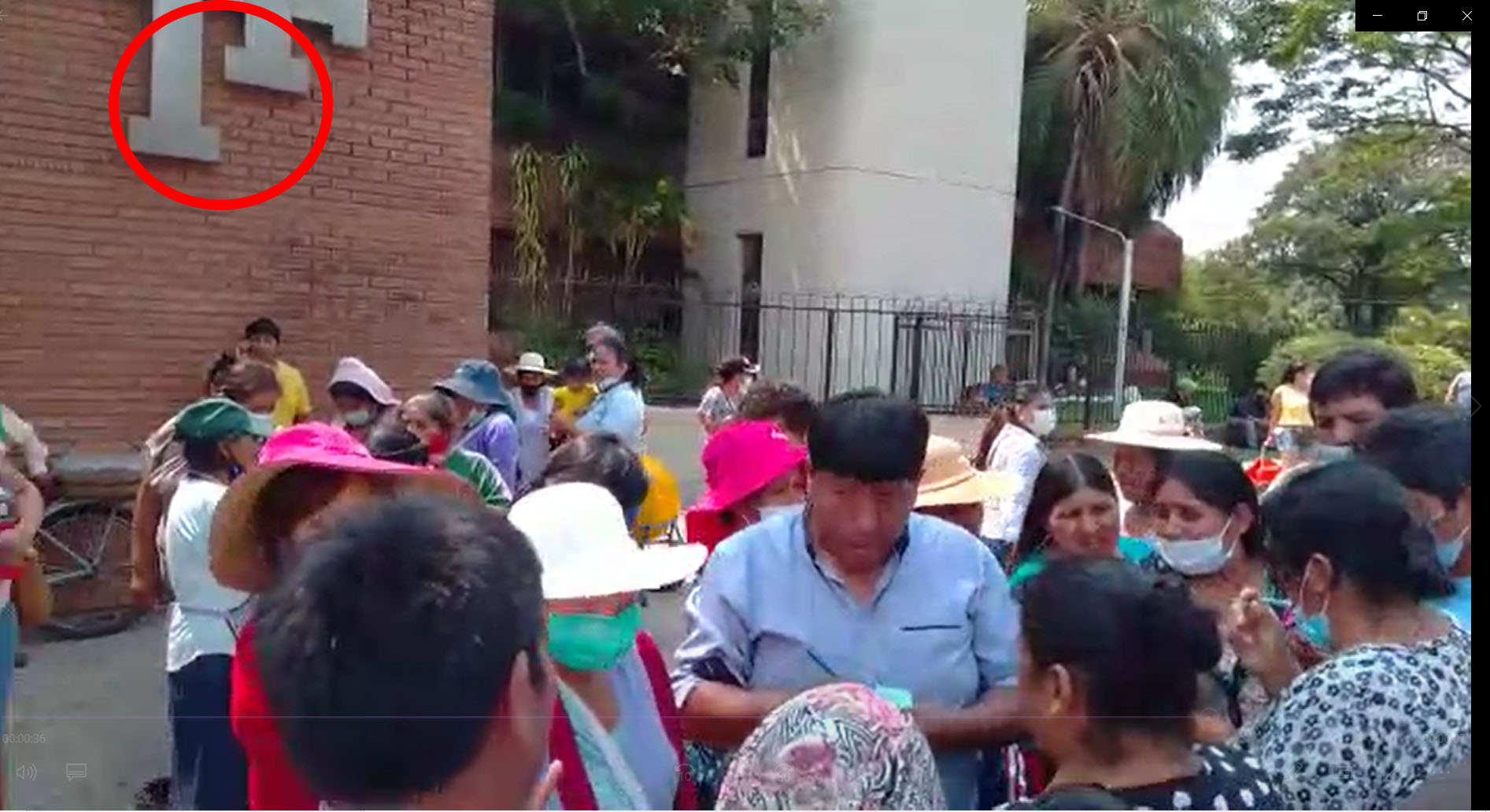 Reviewing Facebook live streams that covered this march, we could identify that in the one carried out by “Journalists for Change” it is seen that the demonstration was held in the front of the Santa Cruz Governorate in which its logo and sign are distinguished.

In the second video that is shared via social networks, you can see how both a woman in a white t-shirt and cap, how men with black caps and lead are surrounded by people, who receive what they deliver. We were able to identify a woman in a green t-shirt and a black wallet clutching the Whipala flag.. The audiovisual is the one we attach below:

Just like in the previous video, there are elements in these images also recorded by the media that confirm that these are images recorded in the march against the reparation of the wiphala. Below we detail some elements that match in several records.

Screenshots of the video 2

In the following image, you can see the four people described above. Both in the second and third image that we put below, The same ones that we were able to extract from the official Facebook of Bolivia TV also appear the man with the black cap and black bag and the woman with the green t-shirt grabbing the Whipala. 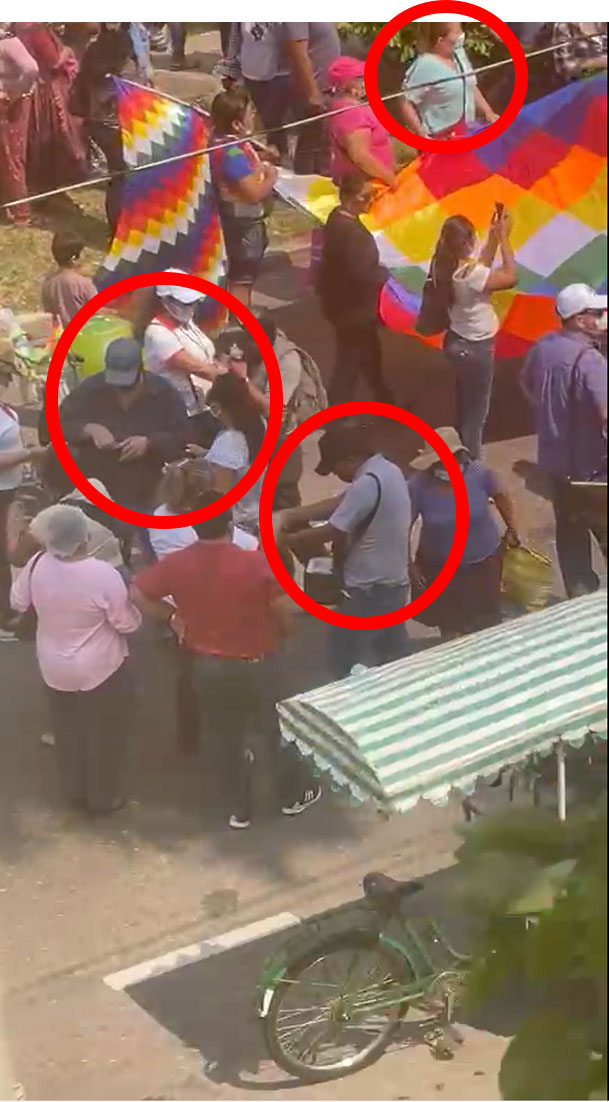 Screenshot of the second video viralized in networks

In the following images you can see the elements mentioned in the video 2 viralized through social networks: 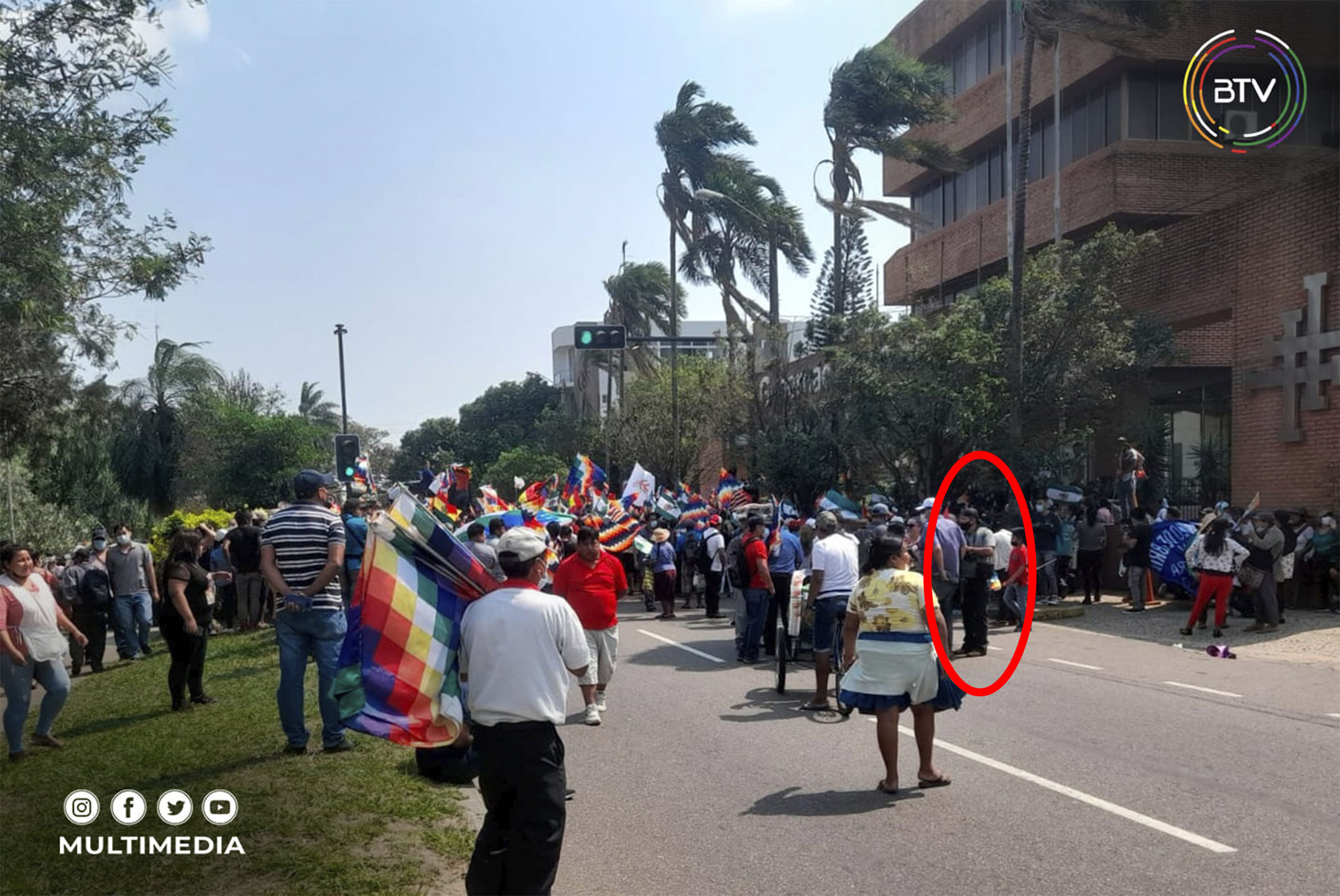 Screenshot taken from a video from Bolivia TV's Facebook