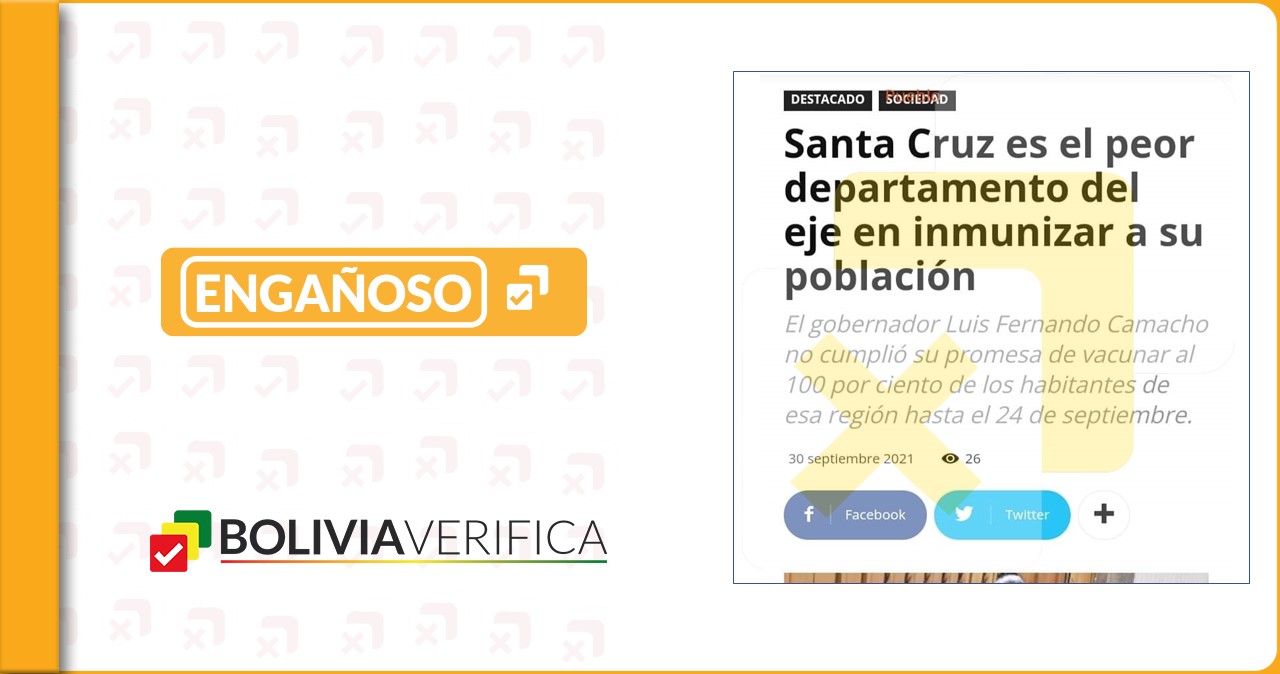 The state media published that Santa Cruz is the department that has immunized the least based on the percentage of vaccines they applied in relation to those available.

The state newspaper “Now the People” published a note titled "Santa Cruz is the worst department of the central axis- in immunizing its population"; However, this statement is misleading and here we tell you the reason.

In the note disseminated by the state media, the following is assured::

“The epidemiological report of statistics and actions presented on Monday to the population by the Minister of Health and Sports, Jeyson Auza, reveals that the proportion of doses applied in relation to the vaccines distributed leaves Santa Cruz with a 53,2% coverage, to La Paz with 53,5% and Cochabamba 60,7%, which reveals that the eastern department has the lowest percentage”.

When reviewing the report issued by the Ministry of Health to which reference is made, we find that the data on the overall percentage of vaccine application are as follows:

In the table above, it can be identified that Santa Cruz has 53,5 % of coverage in terms of doses applied in relation to those distributed, while Cochabamba presents a 61,0% and La Paz a 54,1%. However, the official media headlines that Santa Cruz is “the worst department to immunize of the axis”.

In terms of immunization, the epidemiologist, Alex Cornejo, responded to Bolivia Verifica that it is not valid to count immunity in relation to doses applied compared to those available, but the figures of the unitis must be seen, first and second doses applied.

When reviewing the data published by the Departmental Service of Santa Cruz (headquarters), we identify that a 63% of the population vaccinated with at least one dose (48% first dose and 15% were immunized with unit dose).

These data can be seen in the following report:

Compared this percentage achieved by Santa Cruz and reviewing the portal of Vaccination monitoring “Pen” (updated to 26 September), it was identified that Santa Cruz, is the second department with the highest vaccination coverage in the country (66 % first and united), after Tarija (71% first and united). meanwhile, is the first in the central axis in front of Cochabamba that has a 48% and La Paz a 52%.

When reviewing the report of the Ministry of Health that was cited by the official media, we see that Santa Cruz is listed as the department with the highest vaccination coverage in the central axis.

In the newspaper note “Now the People”, a misinformation is issued by saying that Santa Cruz is the “worse” department in immunizing the population within the central axis, because official data place it as the one with the highest coverage in that strip and the second at the national level, only surpassed by Tarija.

Bolivia Verifica contacted the journalist who signed the observed note, Willian Ramirez, who replied that reference is made to the percentage of coverage, despite the fact that the holder refers to immunization.

The journalist said it was based on data from the Health Ministry report., I mean, the same ones we mentioned earlier.