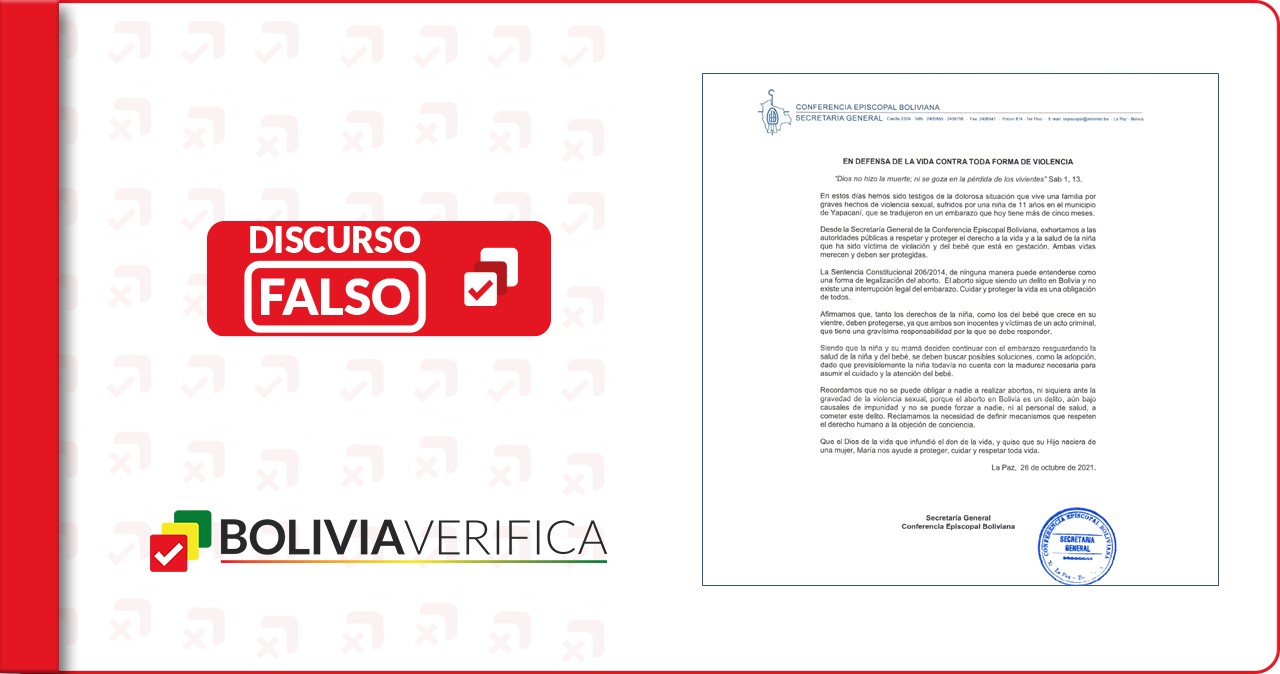 In a statement the Episcopal Conference said that all abortion is “illegal”, but the Criminal Code allows it on certain grounds

Through a statement issued in the past 26 October 2021, the Secretary General of the Bolivian Episcopal Conference, noted that “there is no legal termination of pregnancy". He also said that "abortion in Bolivia is a crime, even under grounds of impunity".

Bolivia Verifica carried out the revision of the aforementioned constitutional ruling, the Penal Code and consulted a specialist in crimes of violence to know the reality of the statements issued by the religious institution. After this review, it was identified that the statements of the Episcopal Conference are false, since there is a regulatory framework that allows the interruption of pregnancy under certain criteria and that therefore, this would not be taken as a "crime" as it had no sanction. Next, we tell you the details.

What do Bolivian regulations provide for??

The penal code in your article 266, establishes "abortion with impunity" (that is, without criminal sanctions) pointing out the following:

“When the abortion was the result of a crime of rape, abduction not followed by marriage, statutory rape or incest, no penalty will be applied, provided that criminal proceedings have been initiated. Nor shall it be punishable if the abortion has been performed in order to avoid a danger to the life or health of the mother and if this danger could not be avoided by other means.. In both cases, the abortion must be performed by a doctor, with the consent of the woman and judicial authorization where appropriate”.

On the other hand, the Constitutional Judgment 206/2014 details that unpunished abortion occurs within the framework of the International Covenant on Civil and Political Rights and the Human Rights Committee, establishing that "The State party should ensure that women victims of rape who decide to voluntarily terminate their pregnancies have access to safe abortion and remove any unnecessary impediments to them". It is also mentioned that the Committee against Torture, stated that the "limits on legal abortions" (result of rape or incest) are a violation of international human rights treaties".

At last, the judgment states that the requirements of "judicial authorization" and the “initiation of criminal proceedings” to access an abortion in case of rape, are considered as "provisions incompatible with the rights to physical integrity", psychological and sexual, not to be tortured, or suffer cruel treatment, Inhuman, degrading or humiliating, to physical health and dignity in its components to the free development of women's personality and autonomy, consecrated in the arts. 15, 18 Y 22 of the Cpe".

That is why, through this judgment it was established that the filing of a complaint will not be required, nor the existence of imputation and formal accusation and less sentence, when the victim requests an abortion because of rape or incest.

Consulted by Bolivia Verifica, the lawyer specialized in crimes of sexual violence and forensic psychology, Ariel Olivera, explained about the case:

"The State has understood that because of the condition of girl to whom the law owes preferential attention, it has made it possible to proceed with abortion with the mere initiation of the complaint, that is, with the single complaint., any health center any doctor could make abortion viable".

likewise, pointed out that the viability of the constitutional judgment 206/2014, "it is not only a normative parameter of strict compliance with the norm but rather it is a compilation of the interests and rights that a highly vulnerable population has and holds even more if we talk about children. (...). We're not talking about the moral, but of what the norm establishes and the norm must be complied with".

Bolivia Verifica contacted the legal advisor of the Episcopal Conference, Susana Inch, to know the source on which this institution was based in its claims. about that, according to the jurist, it was stated that nor there is a "legal interruption" because abortion is a crime in Bolivia. However, Recognized than in the same regulations (Article 266 of the Criminal Code) if two cases of impunity for abortion are established, I mean, that it will not be sanctioned for it in cases in which in pregnancy the life of the mother is in danger, or when it has been the result of a violation.

"The reason it was mentioned is that you can't force doctors to perform that abortion., for in truth no one can be compelled to commit a crime.", Said. He added that the State in this case when allowing an interruption must identify a doctor who agrees with this intervention and not force him..

False string: WhatsApp has no intention of charging for messages sent

Video of land grabs in Argentina is out of context