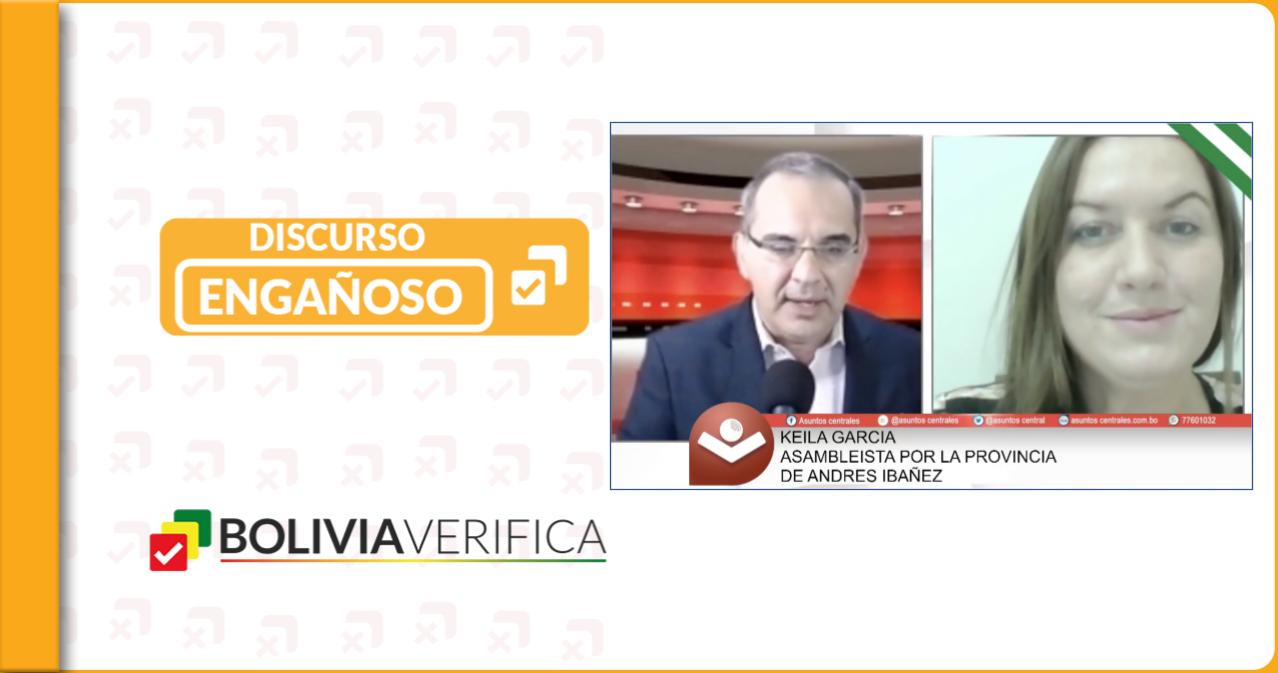 Due to the disputes that occurred on the anniversary of Santa Cruz, the Santa Cruz assemblywoman indicated that the flag that represents the indigenous peoples of the east is a patriotic symbol; However, not so

Last Monday 27 September 2021, after what happened during the protocol acts for the anniversary of Santa Cruz, in an interview with Tuffí's program Aré Vásquez, the assemblywoman for the province Andrés Ibáñez, Keila Garcia, stated that the flag of the patujú is a “patriotic symbol”, however it is misleading information.

To contextualize, remember that during the acts for the anniversary of Santa Cruz there were altercations in the square 24 September. According to García herself, both the wiphala and the flag of the patujú flower were placed unexpectedly..

"That day, the 24 September, we saw that there was a provocation on the part of the government. since the protocol teams of the departmental and national executive had coordinated so that the wiphala and the patujú were not hoisted to avoid these conflicts.. When Choquehuanca approaches the mast, Del Castillo passes the flag out of his pocket so he can hang it. That warmed up the indigenous people of the east who were there.. At the end of the event, people were enraged, they come to take the flag off the mast, to avoid an outrage, what I did was remove the flag, to protect it, to be delivered folded to a military man", Said.

If you want to see garcia's full interview play the video below from the minute 26:23.

The authority said in that same interview that “the flag of the patujú is a patriotic symbol”. Verbatim stated: “

"They talk about denting., of outrage a flag, when in the first place the flag of the patujú is a patriotic symbol”

According to the Political Constitution of the State, Bolivia has seven recognized patriotic symbols. These are: the tricolor flag (red, yellow and green); the Bolivian anthem; the coat of arms; the wiphala; the cockade; the flower of the kantuta and the flower of the patujú (established in the article 6). The Supreme Decree 241 of 5 August 2009 regulated the characteristics and uses of these symbols.

As you can see, the regulations establishes as a patriotic symbol the flower not the flag of the patujú flower. nevertheless, the flag as such is a departmental symbol of Beni and Santa Cruz.

The Constitutional Lawyer, Bernardo Wayar, said in contact with Bolivia Verifica that the article 6 of the EPC, clearly establishes what the symbols of the State are and among them is not the flag of the patujú. therefore, it is not correct to say that this flag is a patriotic symbol, as pointed out by Assemblywoman Keila García.

As part of our speech verification methodology, we tried to make contact with the Santa Cruz assemblywoman to know if she reaffirmed what was broadcast in the program, However, until the closing of this note we could not talk to her since they told us that she was not available to attend to the press.

Photograph of massive mobilization in La Paz is not current, is from the 2019