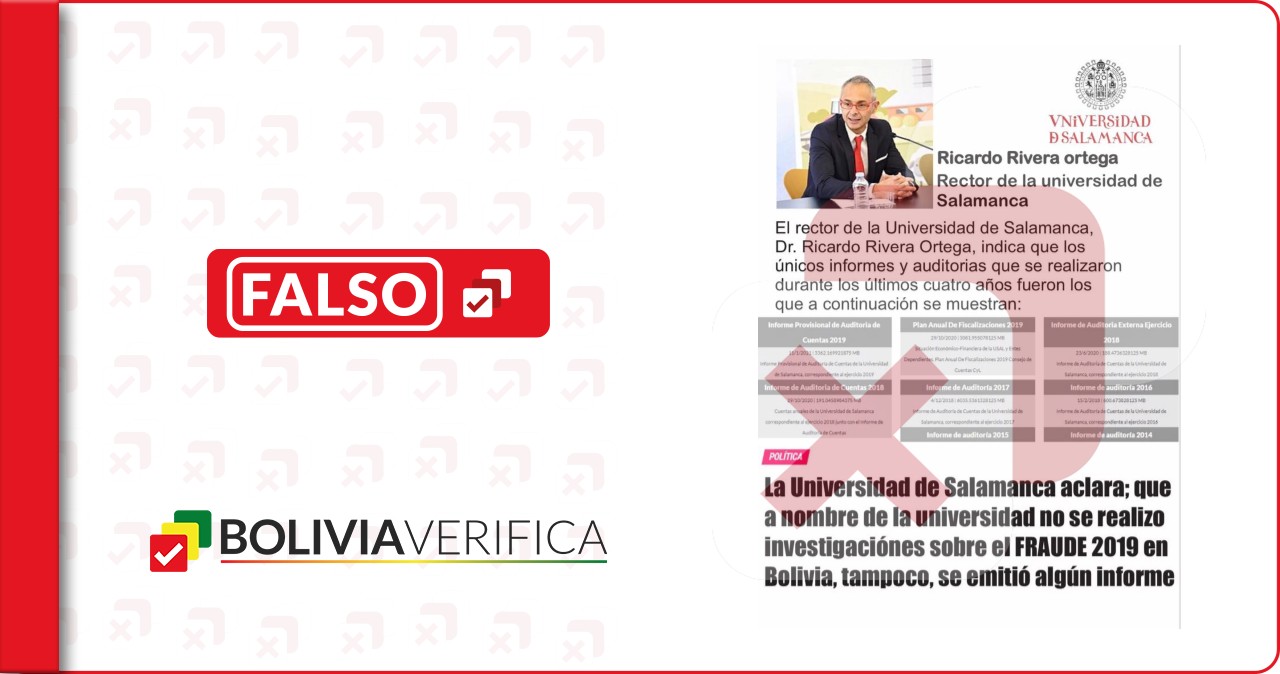 A post that is shared on social networks claims that the rector of that higher house of studies rejected the investigation that dismissed electoral fraud in Bolivia, but it is false, the authority has not addressed the issue

A post that circulates through WhatsApp, points out that the rector of the University of Salamanca, Ricardo Rivera Ortega, he said that no investigations were carried out on behalf of his institution into the case of "fraud" of the General Elections of the 2019 in Bolivia, as indicated by the Prosecutor's Office and the media in the country. This version is fake.

"The University of Salamanca clarifies; that no investigations into fraud were carried out on behalf of this institution 2019 in Bolivia, nor was any report issued", says the headline that accompanies the image of the rector of the educational institution.

According to the image that runs through whatsapp groups, the rector of the University of Salamanca, Ricardo Rivera Ortega, indicated that in the "only" reports and audits that were carried out during the last four years, the Bolivian case does not appear..

In response to inquiries made by mail and to the official website of Facebook of the General Foundation of the University of Salamanca, they replied that indeed, this report was made by the bisite research group. The Bioinformatics Research Group, Intelligent Computer Systems and Educational Technology (Bisite), part of the University of Salamanca.

The report was made "on behalf of an external entity through the General Foundation of the University of Salamanca", responded to Bolivia Verifies from this instance. Being a "private report", the details of the same must be requested from the requesting entity, I mean, the Public Prosecutor's Office.

About Bisite, the General Foundation of the University of Salamanca assured Bolivia Verifies that it is a research group that has "a solid track record in bioinformatics, intelligent computer systems and educational technology". On your site web it is reported that this instance brings together a group of researchers mainly interested in the development and application of intelligent computer systems to different types of problems.

On the alleged announcements by the university or its rector against the report, we do not find any pronouncement of this institution in its official sites on social media or in your web portal.

The last news referred to the rector, Ricardo Rivera Ortega, it has to do with a meeting held this 28 july with authorities of the Spanish province of Ávila, which is part of the autonomous community of Castile and León.

We review the account of Twitter of the rector of the University of Salamanca, Ricardo Rivera, where there is no pronouncement, nor does it do so in its official website on the web. We also perform a quick search for the headline mentioned in the publication we verify, without finding that any media or web portal had published it.

The Attorney General of the State, Juan Lanchipa Ponce, reported the 27 Of July in a press conference that the defendants in the "electoral fraud" case were dismissed because computer experts found no evidence of irregularities “or manipulation”.

Lanchipa said the result of the "expertise in the area of computer security and network administration" on the integrity of the election results of the 20 October 2019, commissioned to the "Deep Tech Lab de Bisite Research Group" of the General Foundation of the University of Salamanca, has demonstrated the “no handling” in the electoral process.

The computer expertise aimed to evaluate the integrity of the computer systems and the information generated during the General Elections of the Plurinational State of Bolivia by verifying the security of the infrastructure used and the existing records of the date of the electoral process.

This three-month investigation concluded with the issuance of the election integrity analysis report which has an extension of 213 Pages. The report contradicts the results of the audit made by the Organization of American States (OAS) who identified "willful manipulation" in the electoral process.

While this is not a particular work of the University of Salamanca in Spain, the investigation into the case of "electoral fraud" of 2019 yes it was faced by a research group that depends on this academic instance. The report was commissioned by the Public Prosecutor's Office. 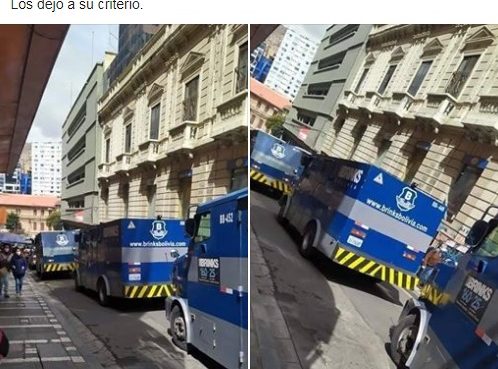 Brinks' trucks took money from the Central Bank and took it to military barracks?