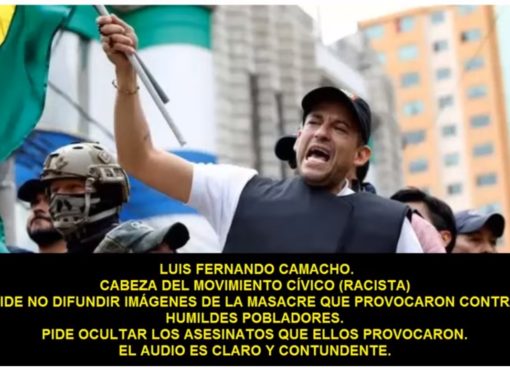 The Youtube channel “DEEP FOREST GROUP 18” published a video showing images of people injured as a result of clashes between peasants, Coca growers, police and military in Sacaba (Cochabamba), the 15 November 2019. As part of the audiovisual there is a voice that commands “not to viralize the recordings” so that the world does not find out about a “massacre” in Bolivia. In this video they affirm that he is the voice of the president of the Civic Committee Pro Santa Cruz, Luis Fernando Camacho.

“BOLIVIA – COUP LEADER FERNANDO CAMACHO CALLS FOR CONCEALMENT OF MASSACRE OF BOLIVIAN PEOPLE (AUDIO) (sic)”, title that video. The Yotube channel that distributes it publishes videos from different countries. During the post-election period, Camacho was the protagonist and head of the citizen movements that led to the resignation of President Evo Morales, today in asylum in Mexico.

In telephone contact with Bolivia Verifica, the head of communication of the Civic Committee Pro Santa Cruz, Mauricio Melgar, denied that the one heard in the video is the voice of the civic leader. “It is totally false. It's not your voice, nor its authorship”, Melgar said.

The video was posted on 18 November 2019 and was reproduced, to date, 24.875 times. “Police and military repression in Bolivia has left 23 deceased persons and more than 700 Wounded”, appears in the audiovisual presentation.

Cesar Dockweiler did not campaign in mi cable car facilities