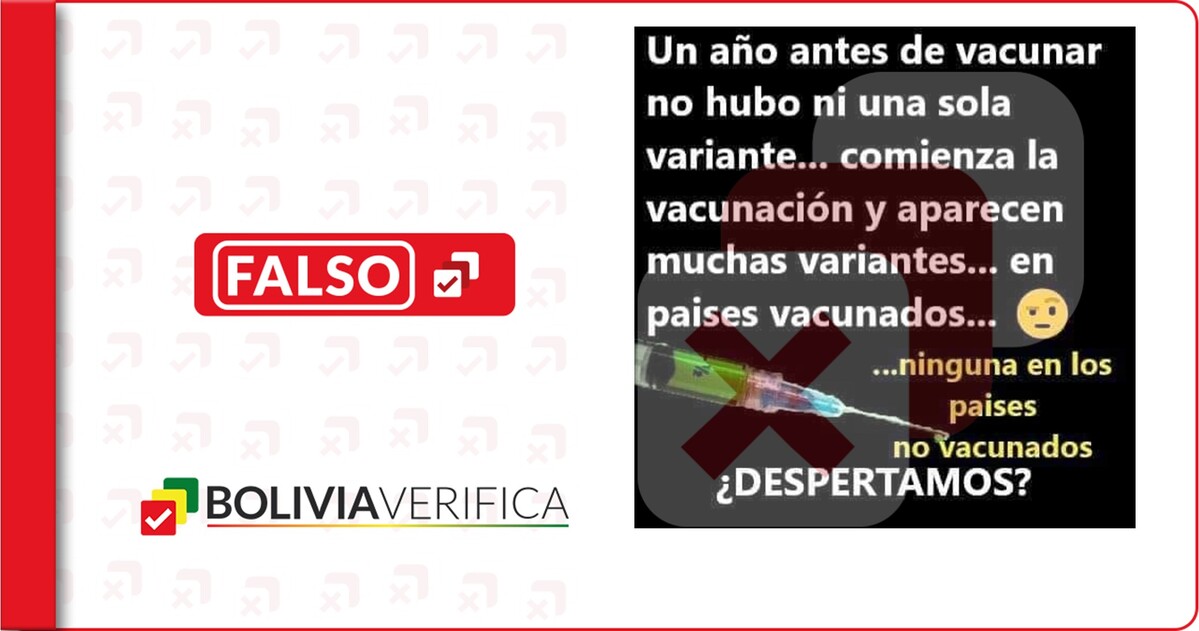 The first sample of such a mutation recorded by WHO is from May 2020, in South Africa. The first vaccine against the coronavirus endorsed by this body was Pfizer in December 2020

In anti-vaccine WhatsApp groups in the department of La Paz and on Facebook, a message circulates that assures that the variants of COVID-19 began to appear once vaccination began, It is also stated that there is no registration of variants in countries where there are no vaccinated. This version is false.

The first variant was registered before an approved vaccine is available, In addition, countries with low immunization, do report different types of variants, especially the delta.

The message that is disseminated was published on 2 August 2021 by facebook page Anunnakis and reptilians among us. What the image in question says is the following:

"A year before vaccinating there was not a single variant... vaccination begins and many variants appear... in vaccinated countries... none in unvaccinated countries do we wake up?". The image was shared on Facebook 336 times, and has had 913 reactions and 219 feedback.

Bolivia Verifica identified three data to analyze from this publication:

"A year before vaccinating there was not a single variant"

The first registered vaccine against COVID-19 is Sputnik V from the Gamaleya Institute in Moscow-Russia, in August 2020, while the first endorsed by emergency use by the World Health Organization (WHO) is Pfizer from the United States, whose register is of the 31 from December to 2020. If you consider these dates and go back “one year before” as the publication says, the pandemic had not begun.

the first cases of coronavirus occurred in Wuhan, China, between the 12 Y 29 December, but it was the 31 of that month that the government of that country announced about an unknown virus that causes cases of pneumonia. The COVID-19 epidemic was declared by WHO a public health emergency of international concern on 30 of January of 2020 and was officially recognized as pandemic on 11 March 2020.

On the subject of the appearance of variants, one BBC note, clarifies that “viruses don't decide anything. Simply, when they infect a cell, almost automatically, begin to multiply, something that includes copying your genetic information. errors are common during the copying process, What, although many times they have no effect, sometimes they produce changes in some of the amino acids that make up the proteins of the virus”. These changes do not happen because of vaccines but because errors appear in the copy of the virus itself in the body.

"Vaccination begins and many variants appear"

is false that variants were recorded at the time vaccination began in different countries.

The first variant was registered, according to WHO data, in South Africa, in May 2020. instead, the first registered vaccine was Sputnik V in Russia in August 2020.

Only in December of 2020, WHO approved vaccine for emergency use against COVID-19.

Mass vaccination began in October 2020 in China, being one of the first countries and in United States was in December 2020.

Therefore, the appearance of the first variant was before the group of frontline people was even vaccinated.

Variants are mutations that appear as a virus spreads and spreads further..

According to a article published by WHO, viruses make copies of themselves that can have small changes called mutations and the sum of these leads to the appearance of variants.

the WHO and the Centers for Disease Control and Prevention of the United States (cdc) have so far discovered eight variants, to which Classified as Variants of Interest (VOI) and Variants of Concern (VOC).

VOIs are those that due to genetic changes can be somewhat more transmissible and / or could aggravate the disease, In addition, the infected person may be more contagious.

meanwhile, VOC is a mutation that has been proven to be more contagious, aggravates disease and death and reduces antibodies generated by vaccines.

Next, We present two tables made by the WHO on the eight variants that identified:

In the first graph you can see the four variants classified as VOI, in addition to information on when it was first detected and the date on which the WHO designated it as a name and classification. 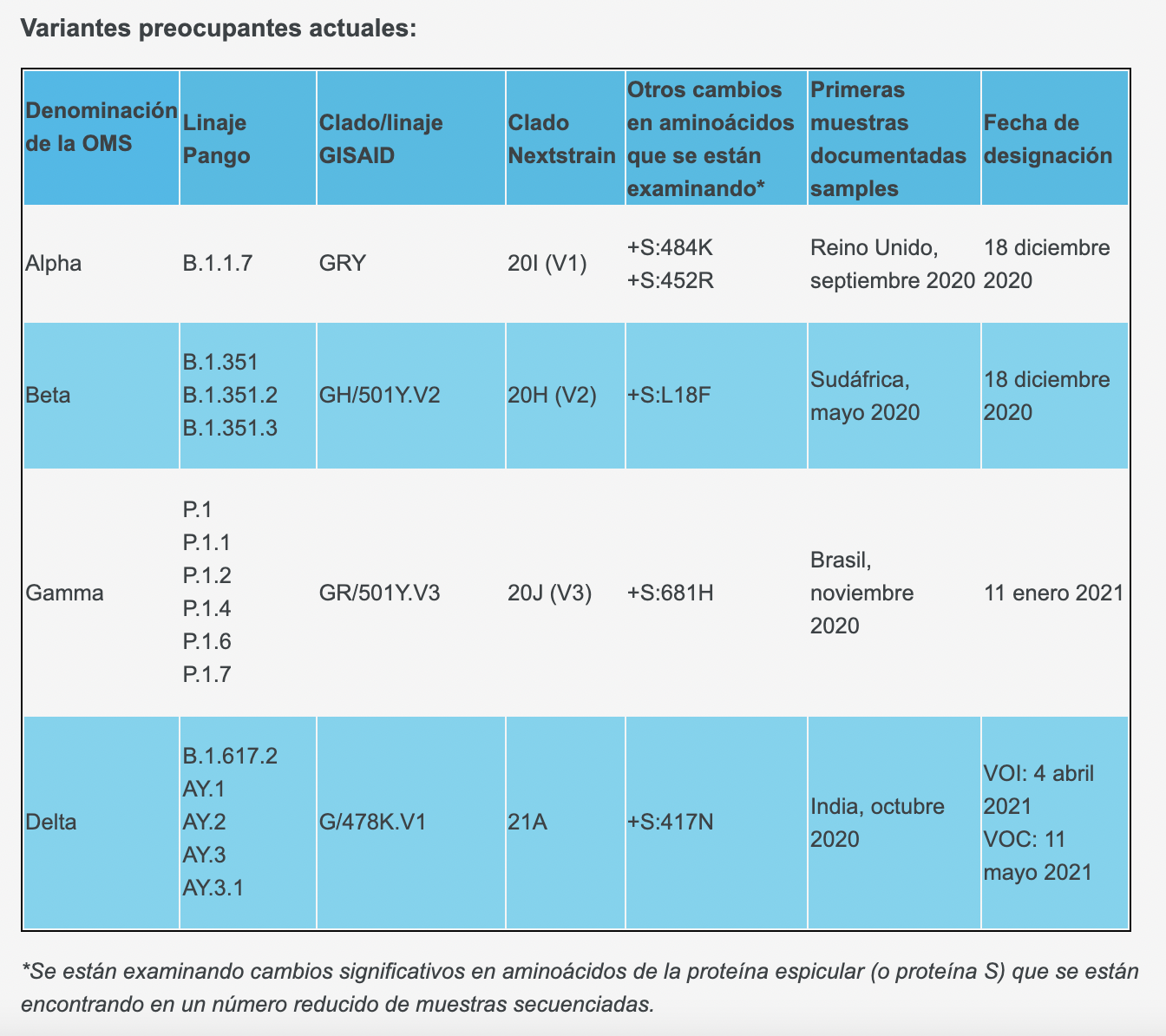 In this second graph it is the same data as the first, but this time of the variants with VOC classification.

According to the explanations of the WHO, the purpose of vaccines is to create antibodies in humans so that their body knows how to react to the virus and can eliminate it., preventing the person from developing severe symptoms and dying.

I mean, variants and vaccines have no relationship and appeared at different times.

"Many variants appear in vaccinated countries. None in the unvaccinated"

In these three countries (1, 2, 3) COVID-19 variants were recorded, even, in Tanzania Reported the emergence of a new one that could have arisen in that country.

All three are countries of the African continent, same as, according to the United Nations Organization, is one of the most recorded cases of the delta variant.

then, it is not true that countries with lower vaccination rates do not register cases of COVID-19 variants.

The message circulating on WhatsApp and Facebook is false. There was no pandemic a year before vaccination began. Vaccines and variants are not related, mutations of the virus had already been recorded before any immunizer was approved.

It is not real that unvaccinated countries or countries with low levels of vaccination do not report cases of variant infection.

In Bolivia, the Minister of Health, Jeyson Auza, stated that they identified three variants circulating in the country: gamma P-1, lamda and mu.

“In the highest epoch of the pandemic- we have identified the gamma variant P-1 in a 53%, in the departments of Pando, Beni, Oruro, La Paz, Cochabamba and Potosi. The variant of interest lamda or known as C-37 Andean, in a 18% in Oruro and Potosí. Also in the country in a 12% we have identified the B-1 variant 621 called as variant mu", declared the authority at a press conference held on 7 September of this year.

Jallalla La Paz did not make an alliance with Somos Pueblo