Does Evo Morales have or does he not have a blue notice from Interpol?? – Bolivia Verifies Skip to navigation Skip to content

in 27 November 2019, the former president of Bolivia, Evo Morales, announced from Mexico that it has been informed about its alleged inclusion in the database of the International Criminal Police Organization (INTERPOL) and that is within the blue card for the crimes of: “armed uprising, public incitement to commit a crime, criminal association, criminal organization, terrorist financing, inciting racism and discrimination”. And that blue notification is enabled in 10 countries such as: Argentina, Peru, Brazil, Chile, Paraguay, Uruguay, Venezuela, Colombia, Ecuador and Mexico.

That same day, the Santa Cruz newspaper “The Duty” published on its digital portal that the Interpol would not have taken out any notice for the former president.

“EL DEBER contacted the National Directorate of Interpol, from where they indicated that they learned of the conference of Evo Morales through the Telesur network, and pointed out that the information given by the former president is false”.

Another of the media that also denied that Evo is within the blue alarm was Radio Fides in an interview what he did to the national director of Interpol, Cnl. Jorge Jorge Campos.

"There is no blue notification", said the uniformed

Then the 28 Of November, at a press conference, the departmental prosecutor of La Paz, Williams Alave, told the media that the Interpol Blue Notice was activated, which means: “to collect additional information about a person's identity, location or activities in connection with a crime”.

“The departmental prosecutor of La Paz, William Alave, confirmed the activation of the blue seal against former President Evo Morales, who is accused of the crimes of sedition, terrorism and incitement to commit a crime, according to a report by Radio Fides.

"It has already been, via Interpol, this blue alert has been activated, which means that this person (Evo Morales) is being investigated and the international police what they do is to know about that investigation that is taken into account for any type of circumstance", Designates Page Seven.

In the evening hours of Thursday 28 Of November, both institutions: the Prosecutor's Office and Interpol again pronounced themselves and indicated that there is no blue card for Morales, since if I had it, would not request information from any State, since they know their destination which is Mexico.

“The Public Prosecutor's Office and the International Criminal Police Organization (Interpol) in Bolivia they denied that the blue search seal against former President Evo Morales has been activated, who is reported for the crimes of sedition, terrorism and incitement to commit a crime, because he is known to be in asylum in Mexico. However, the national director of Interpol, Colonel Jorge Campos, denied that aspect. Also the Attorney General of the State, Juan Lanchipa denied that the blue seal against Morales has been activated”, confirms the Fides News Agency.

What notices does Interpol handle??

The Red: “A red notice is a request to law enforcement around the world to locate and provisionally detain a person awaiting extradition., surrender or similar legal action.

INTERPOL publishes red notices at the request of a member country. Must comply with INTERPOL's Statute and normative texts. A red notice is not an international arrest warrant”.

The yellow: “A yellow notification is a global police alert about a missing person. Published to locate victims of abduction by one parent, Withholding (Kidnappings) or unexplained disappearances.

Yellow notification can also be used to help discover the identity of a person unable to identify themselves..

These notifications are a valuable tool for law enforcement because they can increase the chances of locating a missing person., especially if there is a possibility that you will travel voluntarily or involuntarily abroad”.

The Blue: “A blue notification is used to get more information about a person's identity, your whereabouts or criminal activities in connection with a criminal matter.

A preliminary order by a judicial authority that has the publication of the blue circular is not required, rather, full proof that the accused is involved in a criminal investigation is sufficient to proceed in accordance with, since he holds a valid arrest warrant against him”. 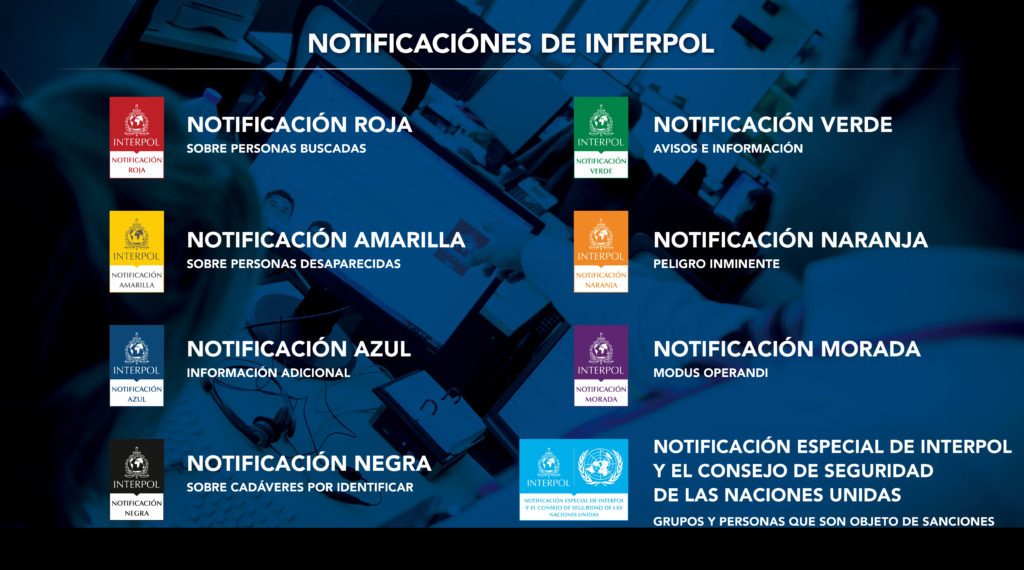 By not having an official list by Interpol and by having different versions of the news, it is described as misleading.

Branko Marinkovic said he supported Carlos Mesa, but it was in the elections of 2019