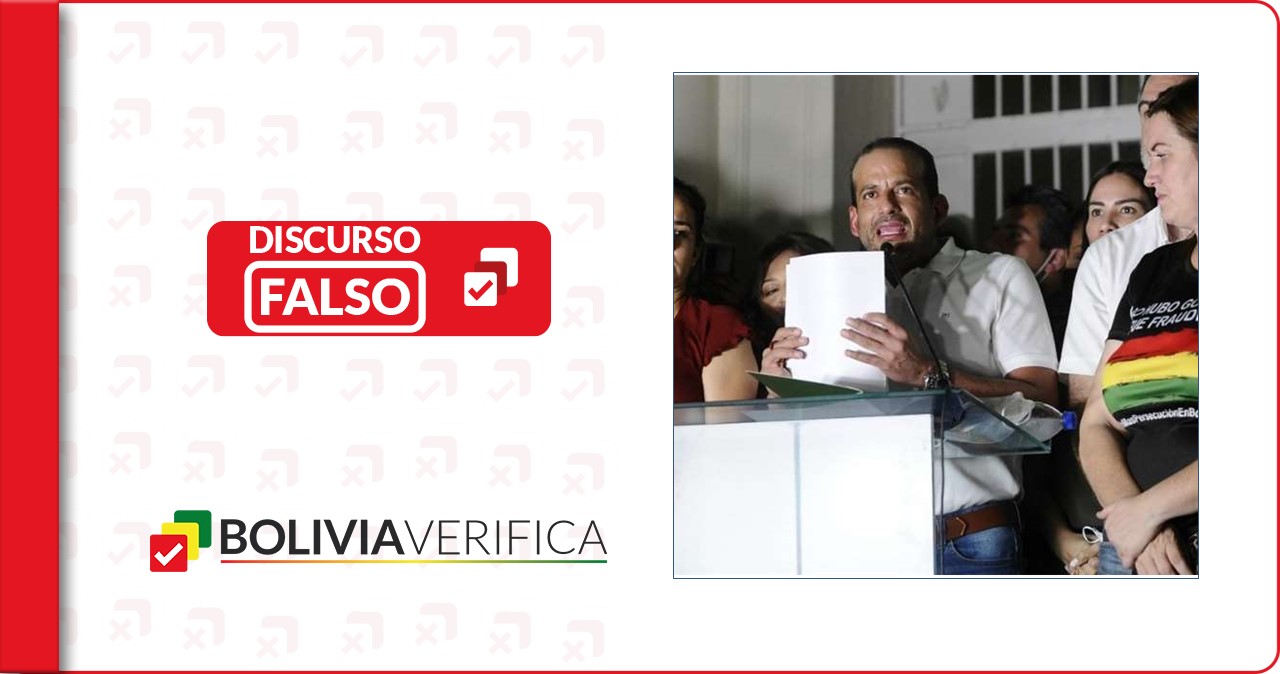 The authority noted that Santa Cruz reached two million vaccinated without “government aid”, but the figures don't back it up

After receiving the news of the suspension of his statement for the "Coup d'État" case in the city of La Paz, the governor of Santa Cruz, Luis Fernando Camacho, issued a speech at Government House (Square 24 September). The words of authority were extended by 14 minutes, time in which it incurred in issuing two false data.

The Santa Cruz leader, pointed out the following:

"Our department has been hardest hit by the pandemic., but we have worked together, universities, institutions, Entrepreneurs, guilds of the people and our noble doctors and for that reason, we have surpassed two million vaccinated without the help of the government and with the effort of our doctors, if they let us work we can go faster (...)"

This statement can be heard in the following live broadcast of the Santa Cruz program “The Cafeteria” in the minute 06:53.

Bolivia Verifica identified that in this statement there are two false data, the first is that contrary to what the authority points out, Santa Cruz received help from the National Government in the provision of vaccines and on the other hand, according to official data, the department has not yet exceeded two million people vaccinated.

Next, we tell you how we came to this conclusion.

The Departmental Health Service of Santa Cruz, published yesterday its latest vaccination report, in the same it is pointed out that to date they were able to vaccinate with first doses to 1.019.392 Y 317.313 with single doses. Adding both figures leads to a total of 1.336.705. I mean, less than two million vaccinated (with at least one dose).

likewise, if we contrast the data with the report of the Ministry of Health of the 6 October 2021, we find that Santa Cruz records 1.018.293 people who received first doses and 316.719 single doses. Adding both figures leads to a total of 1.335.012 vaccinated with at least one dose. therefore, do not exceed two million immunized.

Another of the data issued by Camacho was that the total number of vaccinated was achieved "without the help of the government". about that, Bolivia Verifica contacted the head of Communication of the Governorate, Mauricio Melgar, who said that the authority referred in this case to the "vaccination points". As for the data of two million vaccinated, said that it was mentioned in relation to the total doses applied.

formerly, the 24 of September during the session of honor of the Departmental Legislative Assembly of Santa Cruz for the anniversary of this department, Camacho highlighted regulations that were approved. About this he said: “The law for the purchase of vaccines that gave us the possibility of acquiring them and that the date we have not done because the national government has complied with the provision of necessary vaccines” (Minute 9:32). It should be noted that on the same occasion, the authority assured that the department had exceeded the 2 millions of people immunized. Said: “we have exceeded the 60% (of immunized population) with more than two million people immunized” (Minute 2:33). Both statements can be heard below in the governor's live broadcast that he posted on his official website of Facebook.

When reviewing the report of the 29 of September of national vaccination of the Ministry of Health we identified that Santa Cruz received 3.749.288 dose (First, second and unit) managed by the National Government. This can be seen below:

About this, the Minister of Health, Jheyson Auza, said at a press conference of the 7 of October that were delivered more almost almost 4 million doses to Santa Cruz. This can be seen in the following post:

Auza accused Camacho of not recognizing the management of the national government by saying that they managed to vaccinate the Santa Cruz population "without help from the government.".

formerly, in a spot published by the governor of Santa Cruz, it also issued misleading data on vaccination rates in the department.. You can meet them here:

Edgar Villegas was not arrested, a fake post circulates on social networks